“Painting is like having your own special effects factory!”

Heidi Johnson is a painter working in oil on canvas, hailing from Bronx NY. She is residence at Byrdcliffe until the end of September, 2014. To see more of her work, visit http://www.heidijohnsonpaintings.com/, or come to Open Studios at the Byrdcliffe Colony on September 20th, from 5-8pm.

Q. What medium do you work in, and what are you exploring in your work?

A. I am overwhelmed and delighted with the abundance of information that comes through my computer, the print industry and media. It does, in fact, become for me a culture of overrun, excess, and saturation that makes me anxious. My work is about this anxiety. Beginning with a template of Dutch Baroque, as I have in the past is having the advantage of the “built in” content of disparate specimens and objects brought together by the then burgeoning trade routes. I see parallels between the new society being made then and our sped up contemporary situation developing now. The most recent work came from less of an intellectual place, than a visceral personal reaction to the events of my life as an artist over the last two years in New York. They are about struggle and eventual defeat within a larger system against odds that are bigger, stronger, and more unwieldy than one has ever dealt with before. Again, the evidence of a farcical situation. They are about seeing oneself be devoured and are a bit more surreal and removed. They are, to me, about a world around one that is unraveling in unexpected ways, dreamlike in experience. Its as though things and events are beginning to be oddly out of place. It’s about being overrun in one’s environment. There are recognizable objects and places, but the congestion of the spaces with other life is making the spaces almost airless. I began this body of work and ideas using dystopic popular literary references that were reposed as more psychedelic than was originally told. I believe this earlier work came out of my desire to make paintings that read as dense literary passages. It was my idea that they should be apprehended all at once, not linearly as one would read them as printed work. At that time in 2007, I was making paintings by first making lists of words and ideas and arranging and layering them into paintings. 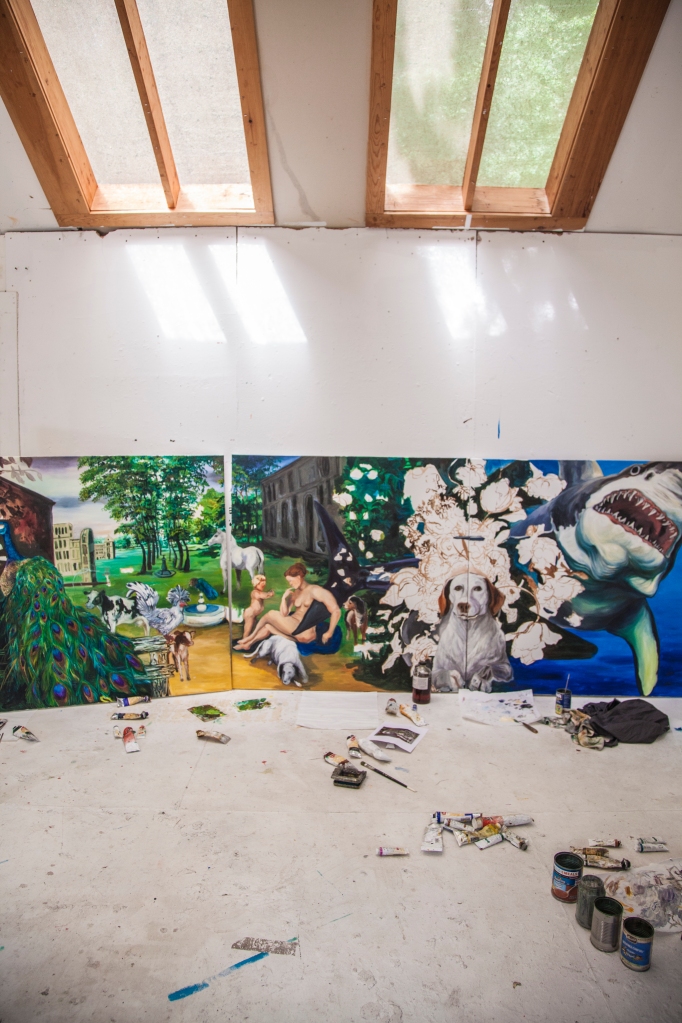 I am consumed with time; It’s emotionality and how it piles up (literally). Throughout the ages leaving its traces in paintings, especially Dutch Still life, I take a lot from Dutch allegory and Forest Floor paintings. The latter, especially, with their sometimes farcically creepy foreboding. Humor, has crept into my work on little feet over time, as they say, on little cat feet!  I also recognize that the process of painting itself is a record of time. Its this connection from my hand to the material with it’s attendant sensibility and direct connection on a living being that’s kept me hooked on painting.

Q. How has being at Byrdcliffe inspired you?

A. I have been relishing my time here at Byrdcliffe immersed in this dense tangle of nature and animals. The experience is not unlike one of my paintings. In New York, in my studio which is located in a factory in an elbow of two major highways, its like living in a kinetic collage, don’t get me wrong, I love all the stimulus and crazy looking modernist vistas out my window, but my interior self is on a fantasy woodland clock. Sort of like those elaborate cuckoo clocks, or more precisely an animated Dutch Allegory. Byrdcliffe has afforded me this incredible sense of forested pattern(leaves, bark, lichen, everything) and time that supports my content and process. It has been the most incredible gift to have a beautiful private studio and unlimited time to work and rework. Artists need this in their process, this time, to look and rework and bring their art to it’s next level of completion

I cannot stress enough, the importance of an artist having time and interior space for their work. This residency at the stillness and sylvan setting of  Byrdcliffe has brought forth realizations that possibly  would not have been apparent in the city with its clearly delineated schedules, activities and never ending wash of imagery. Being an artist for me is like having a HD3D TV for a brain, and being able to step into  silent d-pressurized Byrdcliffe is a gift. 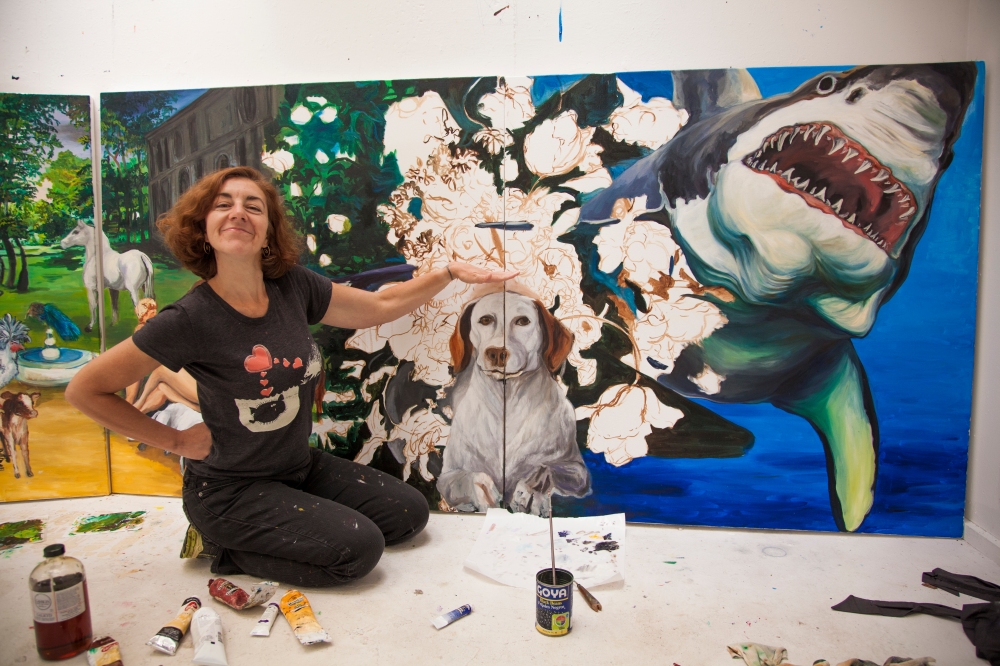